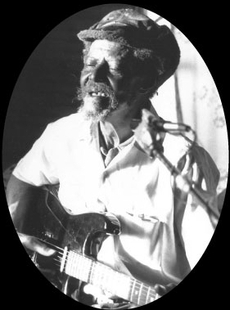 By George Mitchell’s own estimation, Cecil Barfield was his most extraordinary discovery outside of Mississippi. Born in 1922, Barfield was a farmer all his life until a back injury forced him to retire. He began playing blues at five years old, using a cooking oil can he had rigged up with a neck and one string. He took up guitar at 12, and started out playing rag tunes and dance pieces, though he soon developed the distinctive bottleneck style heard on the Mitchell recordings. When Mitchell recorded him, Barfield performed interpretations of songs by J.B. Lenoir, Frankie Lee Sims, Little Walter, and Tommy McClennan, as well as several of his own strikingly original compositions.

Barfield lived south of Plains, Georgia, the hometown of Jimmy Carter. The nation’s attention was fixed on Plains in the election year of 1976, as Carter’s campaign portrayed the area as a bastion of racial harmony in the South. Mitchell remembers it differently: “We were recording Cecil in this tiny sharecropper’s shack in some guy’s plantation. And in the middle of the session, the plantation owner’s son came down and told us ‘You can’t be in this house.’ So I went up to the plantation house to explain the situation to the owner, and this guy was just beside himself. ‘This is not the way we do things in Plains, Georgia. White people are not in niggers’ houses.’ I tried to tell him we were with the Bureau doing fi eld work and he just said, ‘Listen buddy, I have called the sheriff, and you’re gonna be in jail if you’re not out of there fast.’ So, that was Plains in 1976.”

In fear of endangering the welfare checks he relied on for income, Barfi eld refused to let his real name be used on any of the Mitchell recordings issued in his lifetime; instead, the Barfield recordings issued on labels like Flyright and Southland were done so under the pseudonym William Robertson. This was not the only area in which Barfield was cautious. He refused to let Mitchell use a photo of him on the album cover, for fear that someone could curse him by using his image. He sprinkled powders around his door, and carried his own water with him, even when he traveled a few miles to Columbus. Despite Mitchell’s protestations, Barfield would always spend his checks on root doctors for his health problems. After Mitchell retired from fi eld recording, the folklorist Art Rosenbaum recorded and interviewed Cecil. When Rosenbaum asked him how he thought up a song, Cecil replied: “Your heart feels a certain way, then your mind follows, then your hands follow that.”
Mitchell kept in touch with Barfield up to his death from a heart attack in 1994.