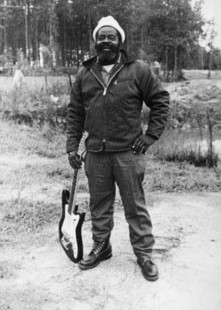 I was born in 1925, the 25th of July in Worth County, Georgia. Lived here all my life. My parents did farm as far as I can remember.

Boy, we had a time! At that time I used to play harmonica on a rack, but I quit doing it, it took too much wind. I was smoking and I got short-winded. It takes a whole lot of wind to blow that harp.

I first started playing electric guitar in 1957. Before that I was playing a regular guitar, but they was good guitars, you know.

Man I worked with sold me an electric guitar for seventy-five dollars. Boy, I played that, we had to run people away from the house. When you had a party they stayed up till the break of day. They stayed as long as the guitar stayed there, they wouldn’t go. Oh boy we had a time! Nobody playing but me and my baby-brother. I wish he was here now. Boy, I wish we could play together again.

He always says he will come home but he never comes. I’m about five years older than him so he did come up right behind me and when he got old enough he got to playing too. I haven’t seen him in fifteen years but we played with one another on the phone to see how good we are. He’s still good. A fellow had both of us one night, he said he had half a gallon of liquor. And he said we played so good he didn’t know which one to give it to and he gave ups both half a gallon.

I been farming on my own for six years now, soybeans, peanuts, and watermelon. As far as money goes I was better off when I was working for somebody else. But even when I ain’t got no money. I maybe got but five cents but if I am ready to go somewhere I can go. I got gas in all them cars out there and in the truck and everyone of them can crank up and go. We ain’t got no fine clothes, nothing like that, but that don’t mean nothing, you know, riding in a bunch of fine clothes. Having something to eat and a dollar or two in your pocket. That’s the way it is with us, if we have to go to the doctor or something else, we get in our old car and take off, go anywhere, and don’t have to worry nobody about it. That’s what I love and work hard for.