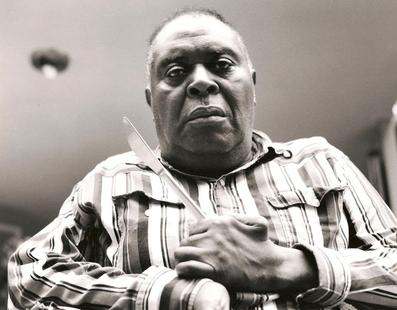 Cedell Davis was born Ellis Davis on June 9, 1927, in Helena, then a booming river town on the Arkansas bank of the Mississippi. He grew up there and in the upper Mississippi Delta around eight miles south of Tunica, on the E.M. Hood plantation, where his brother lived. Together with one of his childhood friends, Isaiah Ross (future Sun recording artist Dr. Ross the Harmonica Boss), Cedell began playing blues, first harmonica, then some guitar.

Then tragedy struck — during his ninth and tenth years he grappled with severe polio. He returned to Helena, to his mother, who was locally renowned as a healer, though she worked as a cook, and there he began the painful process of relearning, in fact rethinking the guitar, which he could no longer play in the conventional manner. “It took me about three years,” he recalls. “I was right- handed, but I couldn’t use my right hand, so I had to turn the guitar around; I play left-handed now. But I still needed something to slide with, and my mother had these knives, a set of silverware, and I kinda swiped one of ’em.”

This was the beginning of a guitar style that is utterly unique, in or out of blues. The knife-handle on the strings produces uneven pressure, which results in a welter of metal-stress harmonic transients and a singular tonal plasticity. Some people who hear CeDell’s playing for the first time think it’s out of tune, but it would be more accurate to say he plays in an alternative tuning. Because the way he hears and plays intervals and chords is consistent and systematic.

Cedell began playing around the Delta as a young man, and over the years he continued to work in some of the world’s most dangerous dives. Somehow he learned to project a kind of presence that defuses violence, keeping him miraculously whole amid raging chaos. There is something Buddah-like about that presence, a sense of having learned to deal with a physically violent world with his mind. It also enables him to compose and sequence verses for new songs on the spot and hold them in his memory for as long as necessary.

Over the years Cedell has played in Southern juke joints with a number of other musicians. His most significant and longest-lasting association was with the great Robert Nighthawk, who was considered the Delta’s finest slide guitarist by no less an authority than Muddy Waters. They worked together for ten years straight, roughly 1953-’63, trading off “bassing” and lead duties song by song. During the early part of his time with Nighthawk, Cedell was based in St. Louis, where he got to know Big Joe Williams, Charlie Jordan, J.D. “Jelly Jaw” Short, and other leading lights. But during the last part of 1957, he was badly injured in a St. Louis tavern, when an apparent police raid caused a massive stampede. Before that, CeDell could at least walk on crutches. But his legs were broken in so many places during the stampede that he has been largely confined to a wheelchair ever since.

On June 5, 1961, he “came back home to play.” At first he was based in Helena, but after he secured a regular gig with Nighthawk at the Jack Rabbit (later the Jungle Hut) in Pine Bluff, Arkansas, he settled there, and there he remains. Pine Bluff’s other claims to fame include a massive U.S. Government chemical and biological warfare research and storage facility, located nearby; and according to CeDell’s song, “If You Like Fat Women,” there are “more fat women there than any place I ever saw.”

Many listeners find CeDell difficult: his sense of time, his sense of structure, that timing–not to mention his lyrics. CeDell is a remarkable communicator, and quite possible the greatest hard core vocalist around. 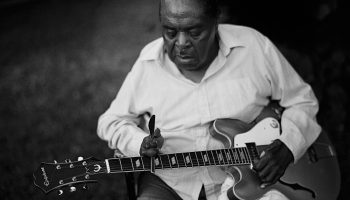 Horror of it All