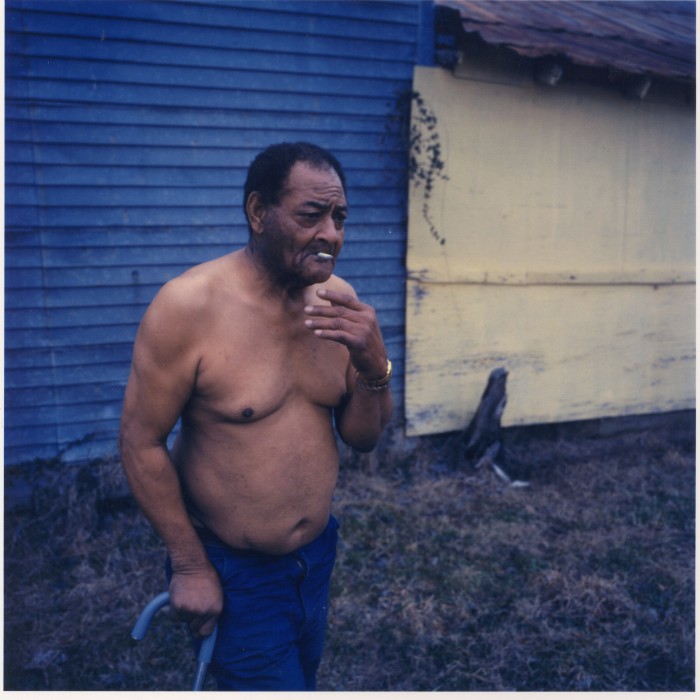 David “Junior” Kimbrough, quite possibly the most important blues guitarist of the second half of the 20th century, redefined blues. Junior’s approach to music is so hugely different from anything that came before him that he ranks among the three greatest bluesmen of all: Son House, Bukka White, and Fred McDowell. An originator, Junior did more than build on certain tradition or perfect a certain style. Junior re-imagined the blues; he made a sound for himself.

If Junior’s sister had been any kind of baby-sitter he might not have picked up the guitar. When Junior was too small to help his father work the fields his eldest sister stayed home with him. She was supposedly watching him the day he took his father’s guitar “off the high shelf,” where his father kept everything he didn’t want his children fooling with. It became routine: when his father left for the fields, Junior carefully took down the guitar. He learned fast and well, well enough to teach a local white boy, Charlie Feathers, how to play.

Junior was six years old, and his sister was doing her usual bang-up job of babysitting the day he took a gallon jug of corn off the high shelf. His mother found him in an alcohol-induced coma; she thought Junior was dead. Junior’s father recognized the problem and knew the solution: his daughter needed a whipping and Junior belonged in the field. After two years of high school Junior was lured into Holly Springs by a job at the John Deere dealership.

Junior couldn’t remember the exact date he deliberately set out to create music but knew the reasons. He was still a young man and had gone as far as he could go at John Deere. If Junior was gonna make his mark in the world, he’d have to do it with a guitar. Up until then he’d been playing the same country blues standards, as well as the contemporary hits of Little Milton and Albert King, in the same jukes and clubs that his long-time friend and rival R.L. Burnside played. And then Junior stopped playing covers and stopped taking requests. Determined not to become just another “entertainer” or “performer,” Junior realized playing covers only helped the composers or the artist who first recorded the song. He wasn’t going to help anybody, ever again. From then on, Junior would only play Junior.

He might’ve been the first person in his family to work off the farm, but Junior never gave up his rural habits like throwing parties every Sunday night with his furniture dragged out in the yard so more people could fit. Before long Junior had to rent a one-bedroom apartment to get a break from the chaos he’d started at home. Junior’s old house became more than a club. It was an entity: it was Junior’s Place–and without help from a sign or telephone locals gathered on Sunday nights to drink and dance. Junior understood music, and had a gift for songwriting, and began developing the music that was first recorded in the mid-’80s for a Memphis State single.

Unfortunately, David “Junior” Kimbrough didn’t release his first album until 1992, when he was 62, but when he finally made his first album, All Night Long (produced by Robert Palmer for Fat Possum Records), the world took notice. Rolling Stone was the first to acknowledge Junior and awarded the album four stars. In addition to giving his music long overdue exposure, All Night Long gave the Fat Possum label hope. Junior, for the most part, was not physically able to tour, now that he finally had the support of a record company. There were notable exceptions: a string of dates with Iggy Pop, and several tours with the Fat Possum Circus (a package deal). But the news traveled– to hear Junior you had to go to Mississippi. Rock bands such as the Rolling Stones, Sonic Youth, and U2 made pilgrimages to Holly Springs to experience his club and hear Junior with his son Kinney Malone on drums and Garry Burnside on bass. Junior went on to record Sad Days, Lonely Nights, Most Things Haven’t Worked Out and the posthumously released God Knows I Tried (all on Fat Possum).

Junior was 67 when died of heart failure on January 17, 1998 at Mildred’s apartment in the Holly Springs public housing project, watching TV on her couch. Mildred Washington, his companion of 30 years, had been taking care of him. Junior Kimbrough still kept a one-room bachelor’s apartment at the time of his death: immaculately clean, with nothing whatsoever on the walls or tables, no pictures, no tour posters, nothing. Junior knew what he had accomplished, and didn’t need any souvenirs. In addition to the 36 children he claimed, Junior put his brand on music. 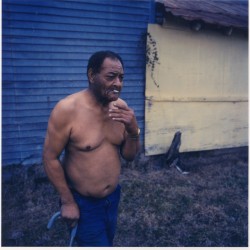 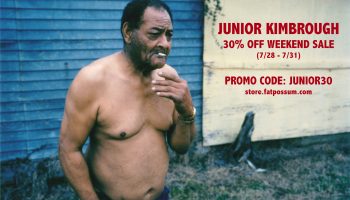 Meet Me in the City