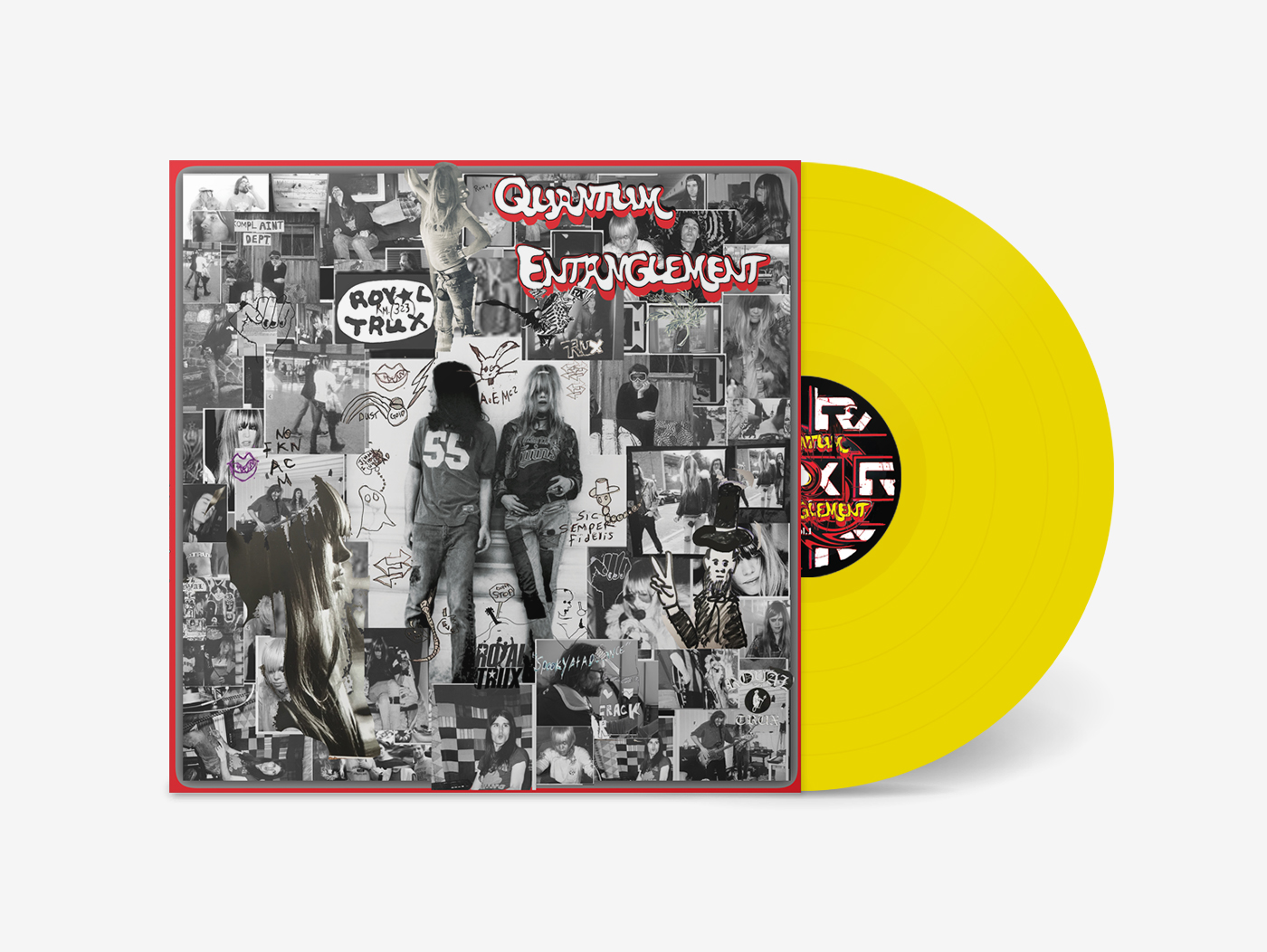 Fat Possum Records are very pleased to announce a new album from Royal Trux.  The reassigned running order and remastering of 14-tracks spanning their career catalog has been reimagined and combined into a strikingly fresh look at various songs never before heard or contextualized as a singular offering which is indeed very new in concept and sound. If you think you’ve heard it before you would be incorrect. Leave it to Trux to create a new coherence to the disparate sounds, recording methods, and decades that

make up their inimitable careers as visionaries and unconventional rule breakers that have been laying tracks for the newest of bullet trains well before such trains ever existed, Science Fiction? no just Truxian methodology as usual.

“Quantum Entanglement” will be released on Friday 29th November 2019 for this year’s Record Store Day Black Friday, The album follows the release of their widely acclaimed  album “White Stuff” which was released in the spring of 2019.

Possessed of a natural ability to always give us something unexpected, necessary, and truly unique, Jennifer Herrema (vocal, moog, guitar, melodica) and Neil Hagerty (vocal, guitar) came together in the mid-80s as Herrema was finishing high school in Washington DC.

Their s/t debut, made in ’87, gave a hint that something unique was coming out of their insular obsessions (psyche, noise, bentshot blues and diseased production) and their second LP, Twin Infinitives, an album of unforgettable songs played with the freedom of Beefheart, the power of the Stones, the ghostly suggestiveness of Albert Ayler, took things even further out.

92’s Untitled and 93’s Cats And Dogs refined the chaos and by 95 Royal Trux had signed to a major label for major money (neither of the two had bank accounts, credit cards, or drivers licenses) and were promoted as bad ass wild cards, dangerous, – and a few other themes deemed “cool” as marketing gimmicks –  that stuck as an indelible image that still follows them. Mostly because it was (mostly) all true.

Their major label debut, Thank You, saw them hook up with legendary producer David Briggs and by 98 they had jumped ship returning with the astonishing Accelerator, another step into a new space, a lysergic re-imagining of the 80s that again proved Trux’ heroic fearlessness, and cast a baleful light on their pootling contemporaries.

99’s Veterans Of Disorder was RTX’s heaviest hit of hard-rock menace, an album that reflected the insanely feral Trux live show, at the time, something akin to seeing Miles Davis’ early 70s band jamming with Robert Quine while 2000’s Pound For Pound sent you back an era and forward an eternity and marked the start of a 14 year hiatus.

Returning in 2015 for a run of live shows, the pair began recording on the industrial fringes of Los Angeles in the summer of 2018 and released their comeback album White Stuff to universal acclaim the following spring.

“The veterans of disorder return in excellent shape” – MOJO 4/5

“The substance-friendly conduits of grot return for their first album in 18 years, and it’s a doozy: all sleaze ball riffs and grand stoner pronouncements.” – The Guardian 4/5

“Royal Trux remain unique, one of a kind; still going wrong like a hydrogen bomb” – Uncut 8/10

“Royal Trux are back. The less things change, the more they stay wonderfully the same” – Record Collector 4/5
“Christ, this could be their best album” – Classic Rock 8/10

“Riff-laden metal (White Stuff), hip-hop (Get Used To This) and a twisted take on soft rock (Suburban Junky Lady) come together in a glorious mess that, with Hagerty offering surreal vignettes on American blue-collar life and Herrema sounding like a female version of Lynyrd Skynyrd’s Ronnie Van Zandt, is…still beguilingly odd” – The Times

“It’s not as out-there as Royal Trux once were, but even on the most accessible songs, it’s still covered in scuzz.” – Brooklyn Vegan